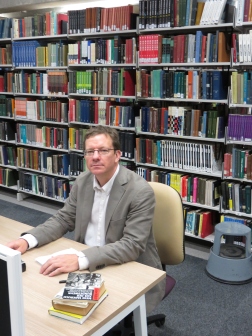 As we move into Welcome Week, colleagues in Modern Languages and Cultures continue to tell us of the research they conducted over the summer. For example, Dr Andrew Plowman, Senior Lecturer in German, took the opportunity offered by a few quieter weeks in the summer to complete an article on Günter Wallraff’s diaries of his conscription in the early 1960s to the Bundeswehr, the armed forces of the Federal Republic of Germany, which was founded in 1955. The article draws on Dr Plowman’s long-standing reserach in autobiography and life-writing as well as a more recent interest in the representation of soldiers and the military in recent German literature.

Günter Wallraff made his name in West Germany between the 1960s and 1980s as a reporter and writer who went ‘undercover’ to expose backward conditions and conservative attitudes in many areas of life in the Federal Republic, and he is still notorious today for the controversy he stirred up when he impersonated a Turkish ‘Gastarbeiter’, or ‘guest worker’, and recorded his experiences in his book Ganz unten (Lowest of the Low) in 1985. In the course of recent research into literary representations of the Bundeswehr in German culture, Dr Plowman discovered that Wallraff’s account in the popular left-wing youth magazine twen in 1964 of his conscription and his attempt to apply to become a conscientious objector once he was already a soldier was his first publication. Further investigation threw up the intriguing finding that Wallraff went on to publish amended versions of his text several times in his career, each time with different accompanying texts.

Dr Plowman’s article explores the relationship between the different versions of Wallraff’s Bundeswehr diaries by setting them in the context both of controversies around the Bundeswehr in the years after its establishment and of the development of Wallraff’s career as a writer.

Until the 1990s, there is a surprising lack of engagement with the Bundeswehr on the part of writers in the Federal Republic and Wallraff’s diaries of his conscription thus stand out as a compelling historical, literary and autobiographical document of the Bundeswehr.

Dr Plowman’s research aims to show how Wallraff’s amendments to the successive versions of his text respond to the aggravation of controversies around the Bundeswehr, particularly at the time of the student movement of 1968. But it also shows how Wallraff’s account of how he was conscripted, sought to object and published his diaries of his experiences also became an important part of his personal mythology. The successive versions of his diaries are an important site of his self-fashioning as a critical and controversial figure to which he returned many times to defend his often contentious methods and to signal shifts in the direction of his work.