In October 2016, Professor Claire Taylor was awarded Impact Acceleration funding for her project Latin American Art and Museum Policy. Here, her research assistant, Ailsa Peate, a doctoral student in Latin American studies at the University of Liverpool, tells us more about the research.

Overall, the Latin American Art and Museum Policy project aims to increase the impact of Claire’s previous research, Latin(o) American Digital Art, by focusing on galleries and museums, community media groups, and artists themselves, as well as establishing new links between the University of Liverpool and museums in the UK and Latin America.

As part of the Latin American Art and Museum Policy project, we have revisited the policy document created after Claire exhibited the digital artwork of four Latin American artists at FACT in 2014 as part of her previous project on digital art from the region. The policy document provides guidance for these institutions when approaching exhibiting digital artworks which deal with memory and trauma in a physical space; when running workshops on the topic through the use of digital arts; when considering the most productive manner in which to engage the public in thought on the topic of dictatorship and memory through a digital approach, and provides insight into Twitter curation as a means through which to expand on the physical creative space of the gallery/museum among other objectives. The document has now been translated into Spanish and disseminated to museums, galleries, and action groups with a focus on military dictatorship, state violence, memory, and trauma in six Latin American countries.

Among other outcomes of the project, we are currently also contributing to refreshing the  Federation of International Human Rights Museums‘ (FIHRM) website through the addition of new case studies, based on specific artist exhibitions at FACT in 2014.

The Latin American Art and Museum Policy project also holds at its core the development of a project with National Museums Liverpool . NML acts as an advocate for museums all over the world concerning ethical representations of topics such as slavery, corruption, and human rights, and is currently advising El Museo para la Democracia Internacional (the Museum for International Democracy) in Rosario, Argentina, a country which has experienced military dictatorship (1976 – 1983).  As such, Claire’s project also works with NML to form a bridge with the museum in Rosario as they develop their materials and prepare for the formal launch of the museum at the end of this year. In order to do so, we are working closely with the museum in Rosario to assess their needs, and are being advised by NML’s own International Slavery Museum, who have expertise in these areas.

In November 2017, we will travel to Rosario to present the policy document and other research findings at the annual FIHRM conference. We’ll also be running a hands-on workshop to encourage discussion on the challenges of representing dictatorship-focused digital art.

Postgraduates in Modern Languages and Cultures are highly mobile and travel the world as part of the doctoral research. Ailsa Peate, who is exploring the hybrid nature of Cuban and Mexican detective fiction, has been as far away from Liverpool as Havana and Culiacán, has recently been just off campus, working at the World Museum in Liverpool’s city centre.

Ailsa is at the World Museum as part of the University of Liverpool’s LiNK Scheme, which encourages postgraduate students to work with various institutions in the city in order to develop their research skills outside of their normal academic framework. Ailsa has been on a placement at National Museums Liverpool (NML), which is an umbrella museum organisation which recognises the inherent controversy of dealing with politically-loaded subjects and the representation of potentially problematic materials. One of Ailsa’s tasks at the World Museum has been to help organise this year’s annual Federation of International Human Rights Museum (FIHRM) conference, an event which promotes discussion concerning the ethical challenges facing the museum sector, and promotes different approaches to diplomacy agendas within museum settings. As part of this task, other than focusing on the practicalities of event organising, she explores issues concerning maintaining relations with museums in countries whose ethical approaches may not be in line with those of NML.

One part of my placement is to map NML’s international activity, which means that in future, reports can be easily run for external funders and trustees. It’s good to know I’ll have left something useful behind once the placement is over!

Ailsa has had a highly successful year as, earlier this spring, she was awarded the prestigious Harold Blakemore prize, awarded by the Society for Latin American Studies (SLAS), the UK association for the study of Latin America. This prize is named after scholar Harold Blakemore (1930-1991)  who played a key role in the foundation of SLAS in 1964 and throughout its early period. Since 1991, the prize has been awarded to the best essay submitted each year by a postgraduate student in Latin American Studies. Its monetary value is £600, and the winner is invited by the Editors to submit his or her essay to the Bulletin of Latin American Research. 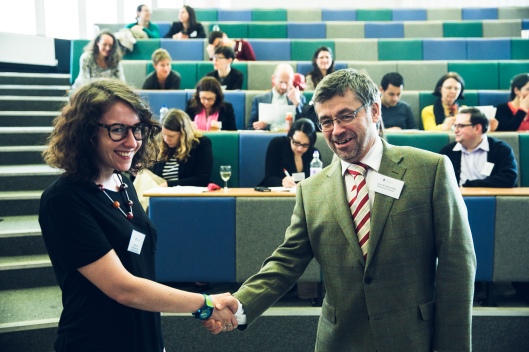