Following on from our plea for ‘likes’ of our Basque video earlier in the week, today we would like to promote Korrika further. As our last blog post outlined, Korrika is a race in support of the Basque language, which will take place between the 30 March and the 9 April 2017. To support the initiative, there will also be an event in Liverpool, organised by the Etxepare Basque Institute and the University of Liverpool, and consisting of a (shorter) run around the university campus.

The event will begin at the Cypress Building (University of Liverpool) at 12:00 midday, on the 1 April 2017. The run will take us around the campus, showing our support for the Basque language and spending some time with people from the Basque country. In this way, Liverpool will be making its contribution to Korrika and to the promotion of the Basque language.

The Basque Country, the home of Euskara, the Basque language, straddles the Pyrenees. The region is made up of seven provinces, four in Spain and three in France. Basque is what is known as a “language isolate”, a language with no known relatives, and is the oldest living language in Europe. Although it has around a million speakers, it is a minority language, as both Spanish and French have become predominant within its area of influence.

This is why AEK, the organisation responsible for promoting the Basque language among adults, set up the Korrika initiative in 1980. Korrika consists of a 2,500-kilometre race that carries support for the Basque language all over the Basque Country, without stopping for a moment over 11 days, 24 hours a day. It is run every two years; this year is the 20th edition and its impact reaches the four corners of the globe, including Liverpool, thanks to the Etxepare Basque Institute, the Department of Modern Languages at Cultures at Liverpool, and the University of the Basque Country.

To contact the organisers of Korrika, you can use the email address: tito-s@aek.eus. 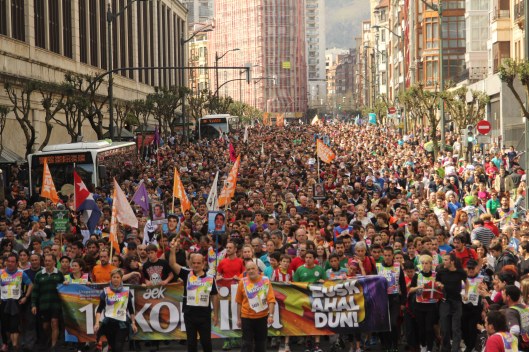