One of the more popular careers for graduates in modern languages is teaching, and a significant number of alumni from Modern Languages & Cultures have gone into the profession. Jemma Marshall (née McKenzie) BA (2005, French & Hispanic Studies) is one of the department’s former students who has pursued a career in education. 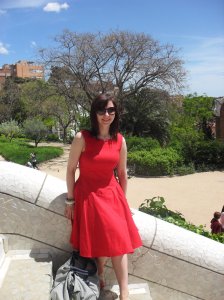 Jemma Marshall on a school trip to Parc Guëll, Barcelona

Jemma came to the University from Liverpool, and spent three happy years on campus, with a year abroad as an English language assistant in Logroño, La Rioja, Spain. On graduating, Jemma completed a PGCE at Liverpool John Moores University and then took on her first teaching role at a school in Widnes. These were two challenging years, but stood Jemma in good stead to become Head of Spanish at Ridgeway High School on Wirral. She particularly enjoyed her time there, especially in organising trips abroad and pupil exchanges, using her contacts in Spain.

I love languages and studying at the University of Liverpool gave me fantastic opportunities and experiences that I wanted to share with the next generation.

The desire to teach at A Level prompted Gemma to apply for the post of Head of Spanish at Lancaster Royal Grammar School, where she has been for five years now. A key part of her role is to organise the annual Spanish exchange, and Jemma closes the circle between her studies and her career by taking her pupils back to the school where she was an English language assistant, in Logroño.