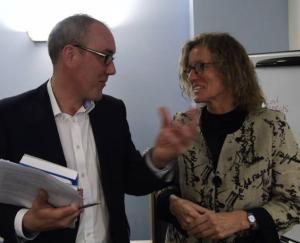 This year’s John Buchanan lecture was given by Professor Sabine Fiedler from the University of Leipzig, who gave an informative talk on ‘Phraseology as a Mirror of Culture  – A Survey with Examples in Esperanto, English and German’. Particularly interesting were examples in the planned international language Esperanto. Professor Fiedler explained that phrases and proverbs in Esperanto reflect different cultures, and classified them into three groups: those which have entered the language from various other languages, those consciously created, and – perhaps most interestingly – those which have originated out of the language and cultural life of the Esperanto speech community itself, and thus encapsulate the very essence of Esperanto’s own unique culture. 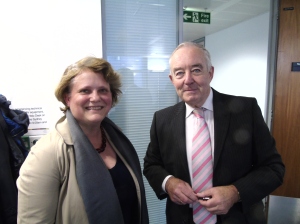 Professor Wim Jansen from the University of Amsterdam and current Buchanan Lecturer added a short epilogue illustrating how an international language such as Esperanto has the unique potential of allowing the wealth of phrases and proverbs from lesser-known languages and cultures to reach a worldwide audience, using examples on this occasion from Basque.

The University of Liverpool, and more particularly the Department of Modern Languages and Cultures, has a long tradition of activities and events associated with Esperanto, and the Buchanan Bequest, gifted to the University in 1930, has helped to ensure that the University retains its position as the leading institution for Esperanto research in the UK.

It might surprise some to learn that the Department of Modern Languages and Cultures has a long tradition of Esperanto studies. Although the department does not offer a degree programme in the language, the Buchanan Bequest, gifted to the University in 1930, supports a range of activities associated with Esperanto.

Esperanto is the planned language published by the Polish opthalmologist Ludoviko Zamenhof in 1887. Some fifty people from six countries took part in the second Esperanto masterclass held last month at the University’s Foresight Centre. The three-day masterclass comprised lectures and seminars on Esperanto grammar, culture, and literature, as well as sessions for beginners in the language. 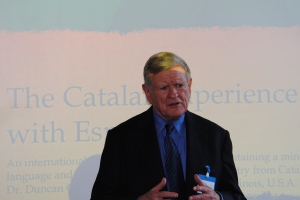 Professor Duncan Charters, from Principia College, Illinois, spoke in English at a public lecture on the problems of translating Lorca and Cervantes. He quoted from a recent Esperanto translation of Don Quixote which, he said, was more nuanced than a comparable English version.

Dr Paul Gubbins, one of the organisers of the event and senior lecturer in journalism at Staffordshire University, highlighted the importance of research into Esperanto, and commended the University of Liverpool for its commitment to this endeavour.

As part of the masterclass, Professor Wim Jansen from the University of Amsterdam gave a lecture on Esperanto grammar. The next masterclass is planned for 2018.