The latest encounter with a mobile graduate student in Modern Languages & Cultures takes us to Guatemala in Latin America, with Juliette Doman. Juliette, who hails from Liverpool, has already two degrees from the University of Liverpool under her belt. In 1999, she graduated with a BSc in Combined Honours (in psychology and philosophy) and then made the transition to Modern Languages & Cultures for her MA in Latin American Studies, which she took in 2006. After a spell in Guatemala, Juliette has returned to Liverpool where she was awarded a prestigious John Lennon Memorial Scholarship in order to undertake her doctoral studies. 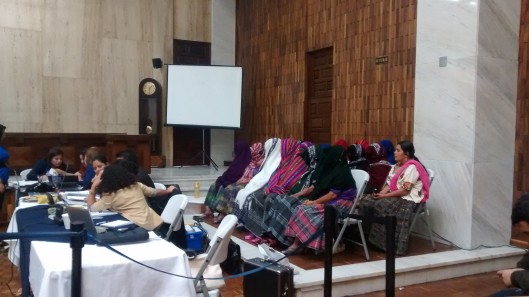 Juliette’s PhD focusses on transitional justice and gender in Guatemala, and earlier this year, she was privileged to attend the trial of a former lieutenant and a military commissioner in Guatemala City, where eleven indigenous Maya Q’eqchi women testified to the kidnapping and disappearing of their husbands, and their subsequent enforced sexual slavery at the Sepur Zarco military base.

Guatemala is like a second home to me, and attending this important trial was both deeply moving and a real privilege

The survivors attended most of the case, and sat with traditional shawls covering their face, due to security concerns. In the event, the two men were found guilty of the crimes for which they had been accussed, and face a collective sentence that comes to 360 years in prison. Juliette was particularly interested by the use of video testimony for the first time in a trial in Guatemala; Juliette’s research explores how this approach prevents revictimization, since it circumvents the need for live testimony and therefore removes the ordeal for the victims, some of whom are in their 60s and 70s, of reliving and retelling the crimes inflicted upon them.

Juliette will return to Guatemala later this year to reflect on and learn from the struggle for justice. She also intends to examine the experiences of participation in the legal process with the survivors and the organizations that have supported them. The Sepur Zarco trial has prompted other victims to come forward and allege cases of sexual violence perpetrated by state security forces.